After America was discovered in 1492, melocacti were one of the first plants to get to Europe as shown by the first portrayals and descriptions of these exotic plants by i.e. the Dutch doctor and botanist Charles de l´Écluse in his work Exoticorum in 1605 (they were classified as Echinomelocactos) or the even earlier mention by the French doctor and botanist Jacques Daléchamps in 1586 in his work Historia Generalis Plantarum. 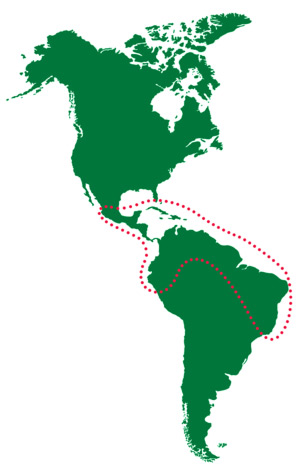 The Melocactus genus was established in 1827 by two German gentleman – the biologist Heinrich Friedrich Link and the gardener and botanist Christoph Friedrich Otto. In 1882, the German botanist and geologist Hermann Karsten gave the genus its first plant – Linné’s Cactus melocactus, which was classified as Melocactus melocactus. Cactus melocactus was described in 1753 by the Swedish biologist Carl von Linné (*1707- †1778). As the international botanical nomenclature (paragraph 23.4) clearly states that specific epithets may not exactly repeat the generic name (which would result in tautonyms), during the revision of South American melocacti in 1991, the species was described by Nigel Paul Taylor as Melocactus caroli-linnaei N.P.Taylor. This plant is also widespread in Jamaica. 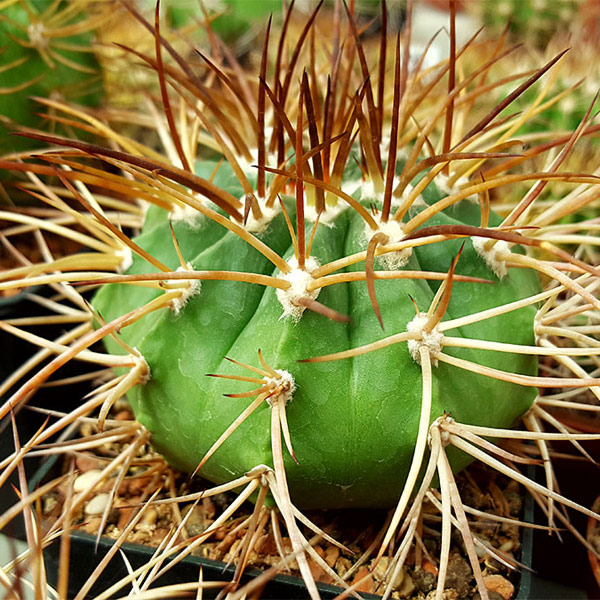 The distribution of Melocactus

Melocacti grow in warm areas (tropical and subtropical zones) of the American continent. Their distribution can be described by an imaginary line originating in the western part of Mexico, continuing through the Caribbean islands to the southwest of Venezuela and Brazil and back to Mexico through Peru and Ecuador. This genus consists of approximately 40 species based on the systematic classification we use. The plants are of various sizes, from the smallest 10-centimeter Cuban M. matanzanus to the probably largest 50-centimeter M. giganteus or M. intortus. If we count the cephalium, these plants can grow up to a whole meter. Melocacti have also adapted to various altitudes. Some of the species can be found in coastal areas, such as M. acunae, M. harlowii and others enjoying the spray of sea water, other species live in the altitude of 2200 meters above sea level, such as M. andinus. 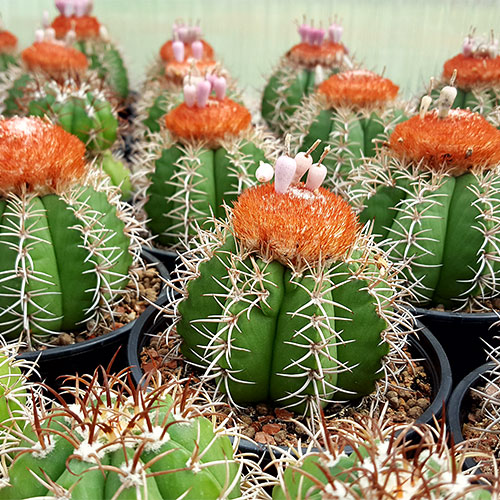 This structure is the characteristic sign of the whole genus. Morphologically, it is similar to the Discocactus genus that also has a decorative central cephalium. Other thermophilic genera are adorned by a pseudocephalium, such as Buiningia, Coleocephalocereus, Austrocephalocereus, Micranthocereus and so on. Lateral cephalium is formed if the plant produces a mass of wool and bristles that are outgrown at the start of a new season, so the plant continues to grow with a new offset. A typical example is the Brazilian genus of Arrojadoa.
The forming of cephalium means the plant has matured. The body is fully grown and during the next stage of its adult life, the plant focuses on the growth of cephalium as well as blooming and fruit production. The cephalium protects flowers and fruits from premature picking by birds and other animals.
The blossoms are quite small and their colour only reaches the near red spectrum. The largest blossom is produced by the Cuban M. evae (3-centimeter wide). The club shaped fruit is either white, light pink, pink, red or purple. 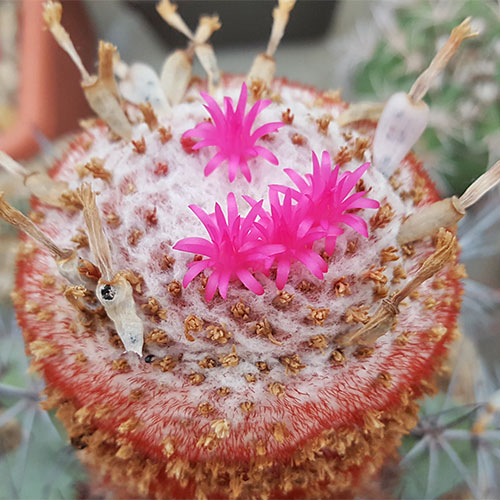 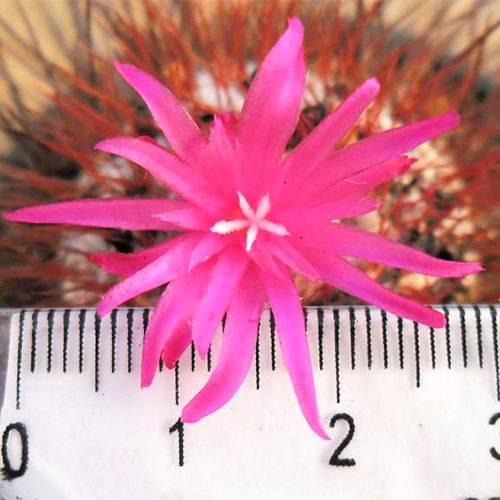